Why Mc Donald's stock is worse than the food

In many forums, newspapers or financial channels, one hears these days that the McDonald’s share is ideally suited for a conservative basic investment that protects shareholders from large price fluctuations and rewards them with ever-increasing dividends. In addition, the company is also touted as a sure-fire winner due to its real estate holdings.  In short: McDonald’s shares are stable and price increases and dividends are guaranteed for eternity. But is that really the case?

A simple look at the development of net income in recent years suggests that McDonald’s has been able to continuously increase its profit. 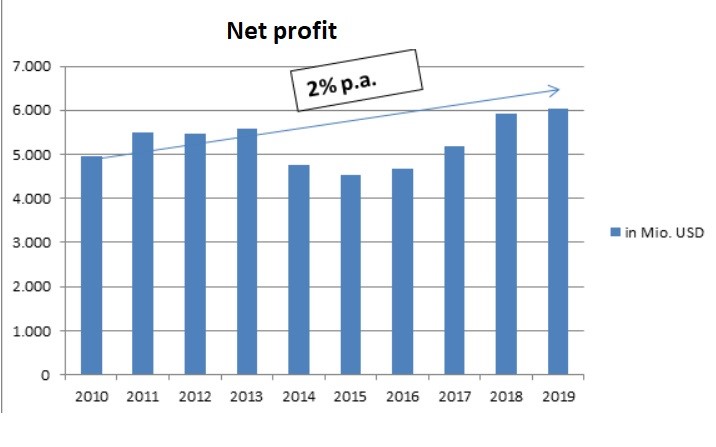 What are investors overlooking?

Such a stable group with ever-increasing profits: almost too good to be true. But unfortunately, private investors in particular often fall for this simple graph. This is because financial blogs, etc. in particular quote this graph to suggest the supposed stability of the group.
In order to find out how McDonald’s operating business has really developed, it is essential to clear the balance sheet of all exogenous and temporary special influences. These include the US tax cut, the interest rate cut and the outsourcing of restaurants to franchisees. This is the only way to verify how high (or low) McDonald’s organic growth really was and how it will develop in the future.
Although all three effects were real and of course have a real impact, the effects cannot be repeated in the future.

The massive tax cut from 35% to 21% can be easily factored out by looking at and comparing earnings before taxes (EBT): 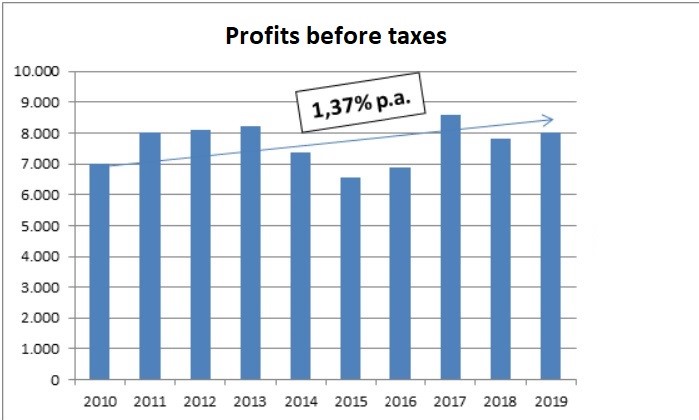 Here we can already see that growth would have been significantly lower without the tax cut.

A look at the development of interest rates shows that this has also led to a significant drop in interest costs.

If one now calculates with the interest rate of 2010, this results in significantly higher interest costs:

The final temporary effect to be factored out: The outsourcing of stores to franchisees. This means that McDonald’s has handed over the management of its restaurants to so-called franchisees. These receive the brand rights to McDonald’s, but in return must comply with uniform standards and pay a franchise fee and rent for the property. McDonald’s thus continues to own the property and another entrepreneur takes care of the business in it. This approach is significantly more profitable for McDonald’s and has led to a reduction in costs.

The higher expense ratio would result in a significantly lower profit:

If the balance sheet is now adjusted for all three special factors, the result is an increase in profit of -4.26% p.a.. Including inflation (2.5% p.a.) even results in a profit increase of -6.6% p.a.. So profit has halved in the last 10 years. 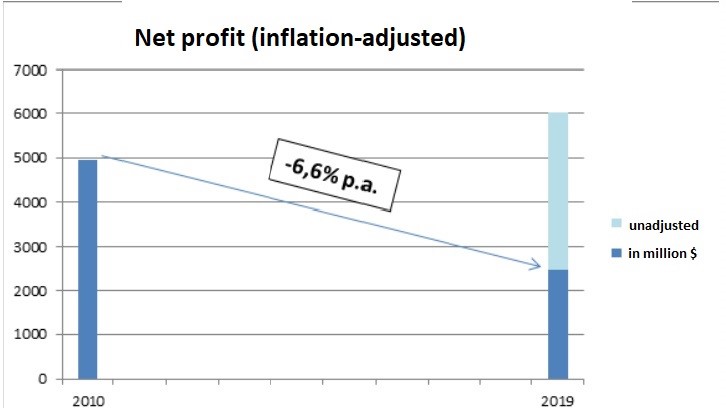 The dramatic collapse in McDonald’s profits over the last decade has been well masked by three temporary special items. But you should expect the curtain to come down in the next decade, revealing McDonald’s true condition: Namely, a company whose foundation is crumbling, whose moat is a fence, and whose balance sheet is so bloated that a small needle is enough to burst it.
But now let’s take it one step at a time: Why can’t the three factors repeat themselves?

The U.S. government balance sheet does not give any more room to repeat such a drastic tax cut.  Already the last cut was debt-financed.
Moreover, with a debt of over $26 trillion (a 26 with 12 zeros(!)), social unrest and high unemployment, another corporate tax cut is hardly politically feasible, apart from the fact that neither Republicans nor Democrats want it-quite the contrary: some Democrats are even arguing for an increase. This is by no means completely far-fetched given the budget balance, and should the Americans want to plug their budget hole, this risk does indeed exist.

Interest rates also reached their minimum in the Corona crisis after the FED cut them to zero.
Thus, there is no more downward room for maneuver – only upward room for maneuver. In particular, an interest rate hike is quite possible after the Corona crisis in the U.S., as on the one hand the FED could raise rates again or investors demand a higher risk premium, which is anything but absurd given McDonald’s balance sheet, as we will see in a moment.

Outsourcing to franchisees cannot be continued at will either, as McDonald’s now only operates 8% of all its stores itself and the Group does not want to outsource all its restaurants, as it makes sense to do this in its own stores, for example, for testing product innovations.

In summary, as far as McDonald’s is concerned, brace yourself for a dismal decade.

But why has business actually been so miserable over the last decade?

At first glance, it is difficult to find the reasons for the halving of adjusted profit. After all, you read one success story after another in the annual report and in the financial sections of all kinds of newspapers. I have been able to track down a number of reasons.
I guess some of you can remember the McDonald’s commercial in which McDonald’s advertises products that cost only one euro – the hamburger, for example. This has been costing €1 since 2005. It was only in mid-June 2020 that it was announced that McDonald’s would raise the price to €1.29. This means that McDonald’s has charged the same price for this product for 15 years (!). Now, however, 1€ was worth significantly more in 2005 than it is in 2020, so McDonald’s has lowered its prices by the rate of inflation (2.5% on average) every year in real terms. Of course, there have been other products where McDonald’s has raised prices, but in general, price increases have lagged well behind inflation. So McDonald’s appears to have no pricing power at all, or very weak pricing power, suggesting contested competition.
Indeed, the intensity of competition in the fast-food market is exceptionally high. Large fast-food chains, such as Subway, Dominos Pizza, Tank und Rast, Burger King, McDonald’s, KFC, etc., fight for customers, as do hundreds of thousands of “small fast-food restaurants,” such as kebab stores or snack bars. In addition, there are delivery services from numerous restaurants that have gained new momentum as a result of the Corona crisis.
The competitors have not only taken the air out of McDonald’s in terms of pricing power, but they are also putting McDonald’s under considerable pressure in terms of visitor numbers. Here is the development of visitor numbers in the USA:

The trend is also confirmed in the number of restaurants in the USA:

So it turns out that the fast-food group’s competitive position looks anything but rosy, and the competition is sawing away at McDonald’s “prosperity branch.”

But how can the stock’s increase of over 400% within the last ten years be explained? 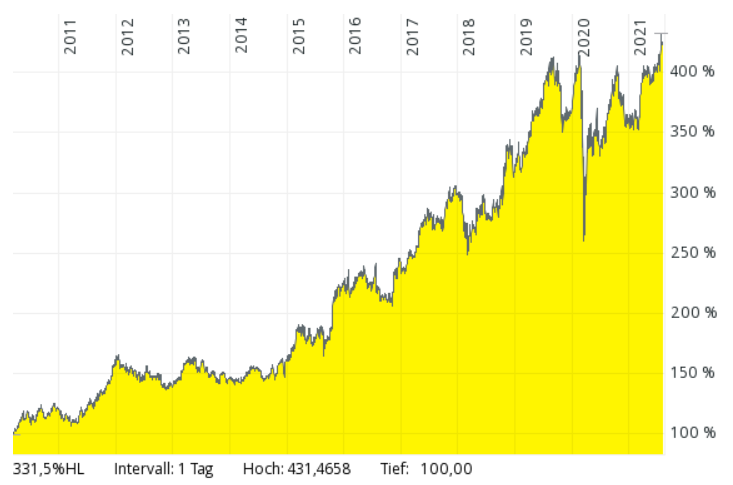 A large part of the increase is due to share buybacks by the company. Within this decade, McDonald’s has spent a total of over 42 billion US dollars on this. However, the company did not pay for this money out of current cash flow, but took on debt for it. A look at the development of debt confirms this: 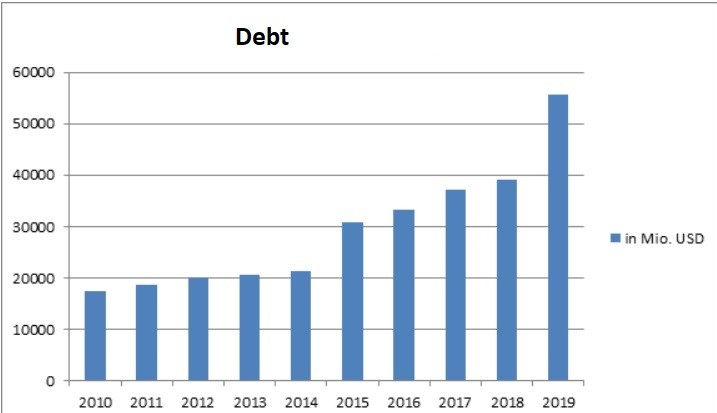 As you can see, McDonald’s debt has literally exploded. However, McDonald’s is setting new negative equity not only in debt, but also in equity. For example, its equity was -$8,210 million in 2019. This makes a net debt (debt-equity) of $63,931 million in 2019. For comparison, the states of Saxony, Mecklenburg-Western Pomerania, Bavaria, Saarland, Thuringia and Brandenburg have this amount of debt in something together.

How does negative equity arise?

The negative equity of McDonald’s arose from its share buybacks. If the price of a share is exactly equal to its book value (equity) and a company buys back shares, the company can immediately cancel these shares and remove them from the balance sheet, thus reducing the number of shares. In the case of McDonald’s, however, shares were repurchased when they were more expensive than their book value. Thus, the shares cannot be destroyed and the repurchased shares must be included in the balance sheet. The difference between the share price and the book value per share is deducted from equity. This explains the negative equity at McDonald’s.

What about McDonald's concrete gold?

It is true that McDonald’s is the world’s largest real estate owner. This even includes very valuable real estate in the most desirable neighborhoods worldwide, e.g. the branches in the middle of New York, London, Tokyo and co.
The exact value of these properties is very difficult to estimate, as the balance sheet shows the value of the property at the time of purchase, and property prices in most cities have risen dramatically since McDonald’s bought the properties.

I have often been asked such questions and must confess a certain sympathy for this way of thinking. After all, it shows that someone understands that McDonald’s is really a real estate company. If McDonald’s were to sell off all its real estate in one fell swoop and thus pay off its debts, there would still be a huge pile of money of unimaginable size left over for the shareholders to make a killing on.

I really like this way of thinking because it is theoretically correct, but unfortunately practice has often shown that things are different in the business world than in a business management textbook.
Let me explain my problem with this way of thinking using Karstadt as an example.
In the 1990s, Karstadt AG was seen as a stable, traditional company with a large real estate portfolio, in some cases in the best locations in German city centers. At that time, numerous financial magazines and “financial experts” reported that it was impossible for Karstadt shares to fall below DM 600, as the value of the entire real estate portfolio per share was DM 600. However, after Karstadt started to face more and more problems due to stronger competition and the number of visitors plummeted, Karstadt did not sell all its assets overnight in order to distribute it to the shareholders, but they tried to stay afloat with saving programs and modernization measures and at best to get their act together again. However, all efforts were ineffective and Karstadt could no longer meet its payment obligations. The song of the story ended with Karstadt AG (which by then was called “Arcandor”) filing for insolvency in 2009 and shareholders suffering a total loss. After the insolvency, all real estate was sold to an investor at very favorable prices. The money was used to compensate some creditors, but not the shareholders.
Now, I am not trying to pass the buck and predict the same fate for McDonald’s. I am aware of the fact that McDonald’s is a very small company. I am aware that McDonald’s and Karstadt cannot be compared one-to-one because of their size and business model, but those who think that McDonald’s is invulnerable because of its real estate holdings should keep this historical example in mind.

What can be expected for the future?

With profits falling. McDonald’s pricing power is too weak to establish prices above inflation. Factors that complained McDonald’s higher profits without having to grow operationally to do so are over. Even if there are still cost savings from digitization, such as the construction of order terminals or the McDonald’s app, I think that there will also be additional expenses in the future that will compensate for this effect.  So I assume that McDonald’s will invest in its own delivery service in order not to leave this market to the competition. However, a delivery service is very cost-intensive and characterized by low profit margins.
In summary, my point with this analysis is to show the true risk-reward ratio of McDonald’s, as it is very often presented in a very distorted way.
This risk-reward ratio clearly shows that for the next decade, the risks of falling profits and falling share prices are very high, while the chances of the business improving converge towards zero.